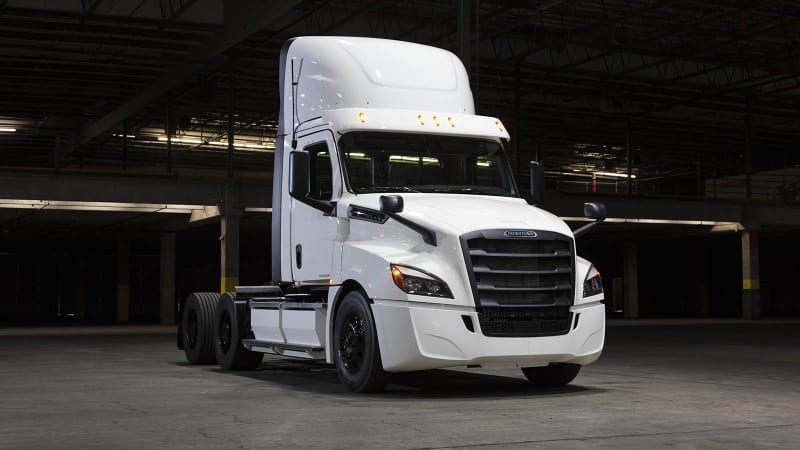 Way back in 2018, Freightliner revealed that it was working on electric commercial trucks and that it would put a small fleet into service to test them. Three years, 38 trucks and nearly 750,000 miles later, the company has announced that it will start taking orders on its electric trucks with production beginning late next year. Two models are available: the Class 8 tractor eCascadia, and the medium-duty chassis cab eM2.

The eCascadia is available with a one or two motors with output ranging from 360 to 525 horsepower. It has a battery pack with 475 kWh of usable capacity that gives it an estimated range of 250 miles. It is capable of recharging to 80% in about 90 minutes. Those numbers outshine the Volvo VNR Electric, which in tractor form has a range of only 120 miles, and maximum horsepower is just 455 horsepower. It charges a bit faster, however, at 70 minutes for an 80% charge. The only cab option for the eCascadia is a day cab, just like the Volvo.

The smaller eM2 has a single motor, either a 180-horsepower or 300-horsepower unit. It features a smaller 315-kWh battery pack, but still has a range of about 230 miles. It can recharge a bit faster than the eCascadia reaching an 80% charge in an hour. The chassis cab version of the Volvo VNR Electric gets the full 455 horsepower from the tractor variant, but the 150-mile range is still quite a bit less than the Freightliner’s.

Although the company will start taking orders, Freightliner hasn’t yet announced pricing for the electric trucks. Besides the trucks themselves, Freightliner will also offer a service to help customers figure out how to best integrate the trucks and associated equipment into their companies.