Buildup for the 2021 Acura TLX started more than a year ago when Acura released the stunning Type S Concept. It was long, low, wide and graced with gorgeous rear-drive proportions. Plus, it was slathered in some of the best blue paint we’ve ever seen. Acura could not have thought of a better way to say, “Hey, we’re back!”

It’s no surprise that the Type S Concept is a dead ringer for the production TLX. Acura designers told us the car was just about finished when the concept debuted. So yeah, the new TLX and TLX Type S were always going to look this good. The latter won’t be arriving until next spring, but our first drive of this next-gen base TLX has us hopeful for the Type S and its 3.0-liter turbocharged V6. And maybe just a little nervous, too.

The bones are really good. Acura developed a new, unique platform for this TLX that was built with performance in mind from the get-go. It’s not just an Accord in a fancy suit. With crossovers on the rise, Acura says its shrinking number of sedan buyers are more passionate about driving dynamics than crossover buyers, allowing them to focus on performance to an even greater degree. It makes sense. We heartily approve.

The result of this performance focus is the most rigid body in any Acura not named NSX. You’ll find more advanced materials like aluminum and press-hardened steel in its makeup than any previous Acura sedan. It has a wider track (+1.2-inch front and +1.6-inch rear), a 2.2-inch wider body, a 3.7-inch longer wheelbase and a 0.5-inch shorter height. Lastly, the dash-to-axle dimension is 7.8 inches longer, giving it those sweet rear-drive proportions despite being a front-wheel-drive platform.

If you’re expecting more rear passenger and trunk space with the extended length, keep looking. Rear legroom is up 0.4 inch, and trunk space by 0.3 cubic-feet to 13.5 – paltry gains for how much larger the car got. The size growth benefitted style and body proportions more than it did functional considerations.

Then, there’s the new suspension: double wishbones up front and a five-link rear. Acura previously used a MacPherson strut design in the front suspension and the move back to a double-wishbone design is great news for driving enthusiasts. Acura’s well-regarded TL and TSX of the mid-2000s had double wishbones up front, as did many of Honda’s greatest hits of yesteryear (Integra, Prelude, Civic Si, etc.). Acura says the return of double wishbones increases lateral stiffness, ensures the optimal tire contact patch in at-the-limit cornering and improves steering feel/response. It worked. We’re happy to report that the car’s entire driving experience is tangibly better.

As for the powertrain, it’s essentially a direct lift from the RDX crossover. All TLXs will be powered by a 2.0-liter turbocharged inline-four that makes 272 horsepower and 280 pound-feet of torque — wave goodbye to the naturally aspirated 2.4-liter four-cylinder and 3.5-liter V6. Fuel economy is down compared to the weak old four-cylinder, but the combined rating is up 1 mpg (23 mpg to 24 mpg) when compared to the outgoing all-wheel-drive V6 model.

Forward momentum is plenty brisk with the full 280 lb-ft coming on at 1,600 rpm. The shorter first gear ratio gets you up and moving in a hurry, and we estimate the 0-60 mph time to be about 5.5-6.0 seconds. It sounds growly and bigger than its 2.0 liters of displacement. That said, Acura does pipe some artificial engine noise into the cabin, and it increases in noise level depending on drive mode.

A 10-speed automatic is the only transmission available. In a vacuum, its shift speed is acceptable, smooth and well-optimized. It’s especially well-tuned to work with you in successive corners in Sport mode, holding onto gears through corners and downshifting on braking. However, its responses are too slow in manual mode and a clear step behind several rivals, including the BMW 3 Series, Audi A4 and Alfa Romeo Giulia. Additionally, Acura won’t let you wring the engine out to the 6,800 rpm redline, automatically shifting up about 300-400 rpm before the tach reaches the red. We ultimately just kept the car in automatic mode. Acura needs to improve this for the Type S, especially considering there is no manual transmission option in the cards.

Front-wheel drive is also standard, but we tested a pair of SH-AWD models. Now in its fourth generation, Acura’s Super-Handling All-Wheel Drive continues to not only vary torque distribution front-to-back (up to 70% rearward), but thanks to a trick rear differential, can also vary 100% of that torque output to the left or right rear wheels. This is a tremendous advantage for grip and lateral acceleration in addition to foul weather traction, as it claws and shoots you through corners with your foot down. It didn’t skip a beat in our couple of hours behind the wheel. Acura even says the system overdrives the rear axle by 2.9% — it will wag its tail, but only a little bit.

A new variable-gear-ratio electric steering system has quickened steering response significantly. Acura says initial response directly off center is 15% quicker and becomes 22% quicker as steering input increases. It’s not quite as quick to respond as the ultra-fast Alfa Romeo Giulia’s steering, but the feeling of agility is heightened dramatically. There’s zero sense of slop or unease on the road, as the car flies through corners unperturbed.

The Advance trim gets adaptive dampers, but like the RDX, the sportier A-Spec doesn’t get them. Its passive dampers are still tuned to provide a sporting driving experience, but the duality of the electronically controlled adaptive dampers is a worthwhile upgrade. The TLX rides better in Comfort mode (with a hint of controlled float) with them, and the car is a hair stiffer than the passive shocks when cranked all the way up to Sport mode. Acura says the shocks are a similar design as the previous generation TLX’s, but they’re running a new tune.

The drive mode controller is the same prominently placed knob in the center control stack as what you’ll find in the RDX, but for the first time in an Acura, there’s a customizable “Individual” mode. Like those found in rival sport sedans, it can independently adjust the powertrain, steering, adaptive dampers, lighting and start/stop system. There’s also preset Comfort, Normal and Sport modes.

One element not controlled by the drive modes is the electro-servo brake system that effectively migrates to the TLX from the NSX. Response from this brake-by-wire system is spectacular, with a stiff pedal and short travel. Engineers told us they found a middle ground between the NSX’s pedal and the old TLX’s braking system, and we like the compromise for daily driving and spirited driving. Although cars like the Corvette and BMW M8 allow you to change brake pedal feel, Acura told us it considers doing so to be a potential safety issue.

The cabin is lightyears ahead of the outgoing TLX as it adopts the same new style introduced with the RDX. It’s purposefully sporty and full of sharp, aggressive lines, while the wood and metal trim are the real deal. The infotainment system has also been upgraded with new software. The hardware is the same 10.2-inch screen as found in the RDX, but the little palm rest aft of the unique touchpad controller has been redesigned. There’s a new conveniently-placed, console-mounted volume knob and seek button as well. All are welcome improvements. 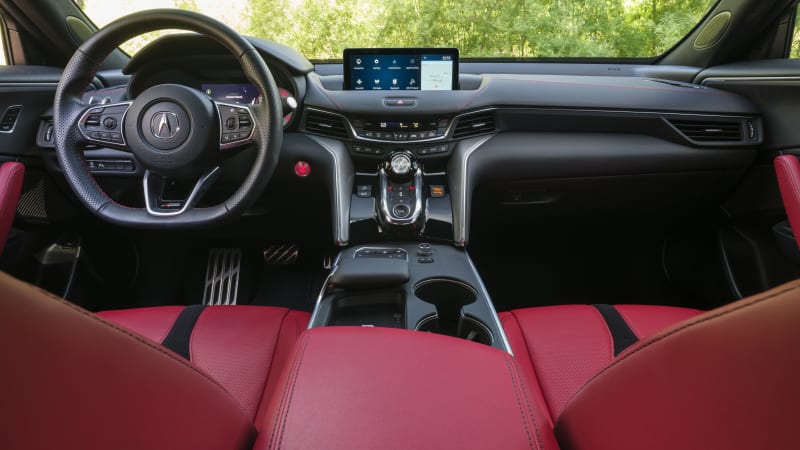 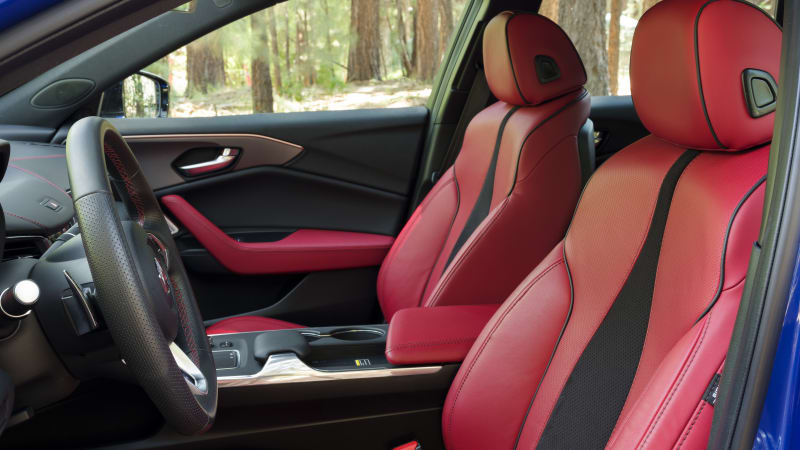 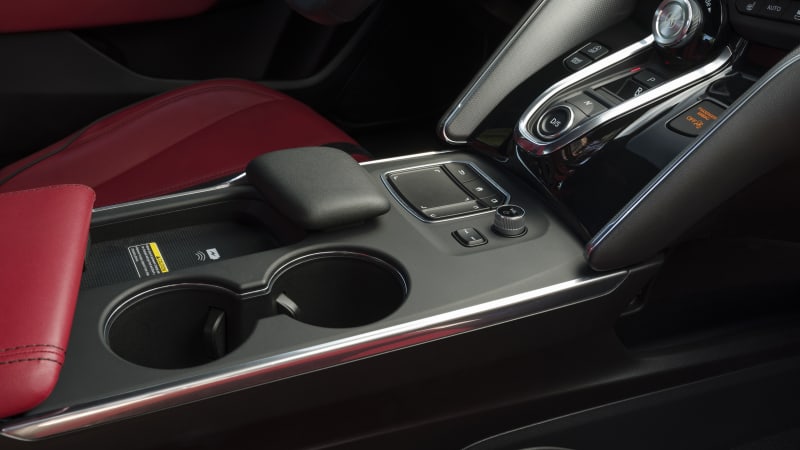 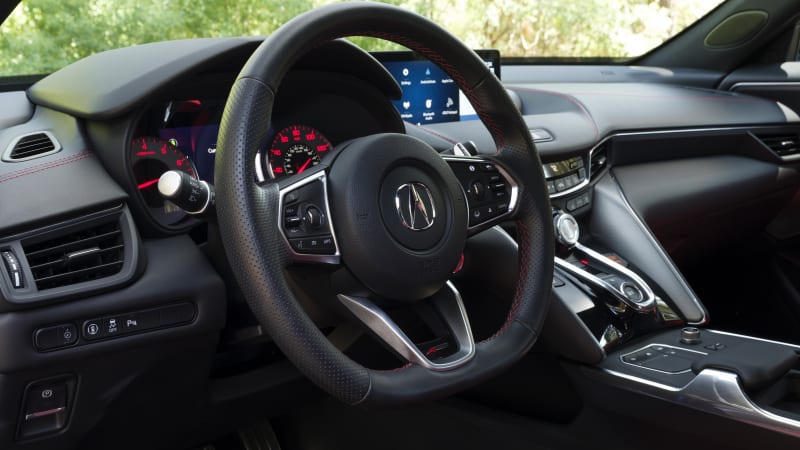 Seat type varies by trim level. The A-Spec’s leather/suede combination looks best in the available red leather, and the suede inserts did a decent job of keeping us in place. But, we wish the bolsters were just a hair more aggressive. Acura somewhat solves this with the Advance trim and its adjustable side bolsters, but how come they aren’t available on the sportier trim?

Other interior highlights include Acura’s new ambient lights that are arranged into 27 themes (carrying different color combinations) named after famous racetracks, roads or locations. The optional 17-speaker ELS Studio audio system is being touted as a huge step forward in audio quality for the brand — there are eight speakers in the ceiling, and it uses a new twin-subwoofer design in the trunk. Audiophiles may find more to love, but to us, it simply sounds like a crystal clear, rocking audio system with great sound that retains its clarity all the way up into high volume levels. It seems like it can stand toe-to-toe with the various high-end audio systems offered by other luxury brands.

And really, that’s the case with the entire 2021 TLX. Both the design and handling are top-tier. The interior styling, features and tech meet (or exceed) the Germans at the TLX’s price point. A base trim front-wheel-drive model will run you $38,525. Add $2,000 for all-wheel drive or $6,750 for the A-Spec. The A-Spec adds all the tech extras in the Technology Package along with a significant design and styling overhaul for a much sportier look. If you want every option on the books, the SH-AWD Advance trim tops out at $49,325. Unless you happen to be dead set on a rear-wheel-drive sport sedan, the TLX’s driving experience is going to appeal to you. And now that many of its previous shortcomings are on better footing, there’s no reason to skip out on giving one a spin.

The BMW M8 leads this month’s list of discounts