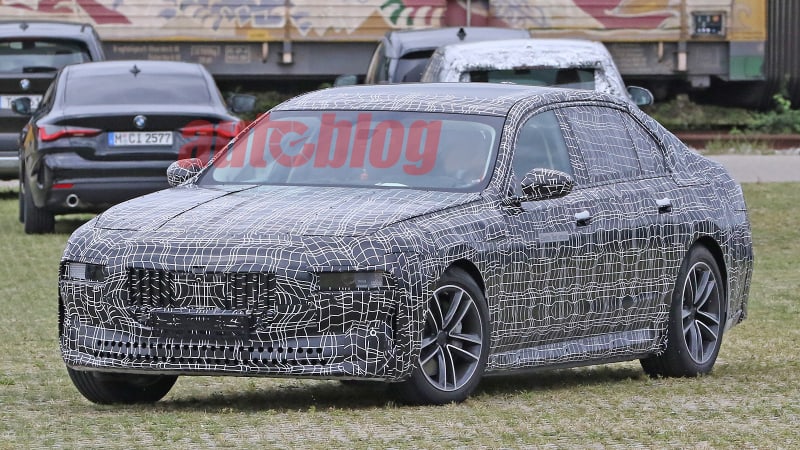 The next-generation BMW 7 Series flagship luxury sedan has been spied with quite minimal camouflage. It looks sharper and leaner than the current model with very traditional sedan proportions. Stickers on the prototypes also show both hybrid and fully electric versions, and the latter could be called i7.

The most striking angle of this new 7 Series model is the profile. Unlike the rounded current model, this car has straight edges and sharp corners, particularly in the greenhouse. These crisp lines highlight the sedan shape of the 7 Series, with clear distinction where the rear pillar ends and the trunk begins. The Hofmeister Kink in the rear pillar is more subtle, too.

At the front, the headlights seem to sit quite low in the front fascia, helping the rest of the nose look low, too. It does look like the 7 Series will have a sizable twin-kidney grille, though not quite as prominent as that on the 4 Series coupe. The tail doesn’t look particularly remarkable, but it does seem to have a subtle lip to the trunk lid, and slender taillights. A distinct difference between the electric and hybrid versions is the presence of exhaust tips on the hybrid.

With the current 7 Series having just been refreshed for the 2020 model year, we don’t think we’ll see the new version revealed for another couple of years. Though it’s possible BMW could reveal and launch the electric version ahead of the gas-powered versions. That variant could be called i7 to fit in with past electric BMWs, and to match the upcoming i4, which itself looks like it might be an electric 4 Series Gran Coupe. We would expect the hybrid 7 Series shown to be a plug-in like what’s available on the current 7. The regular gas-powered version will likely get turbo straight-six and twin-turbo V8 versions.